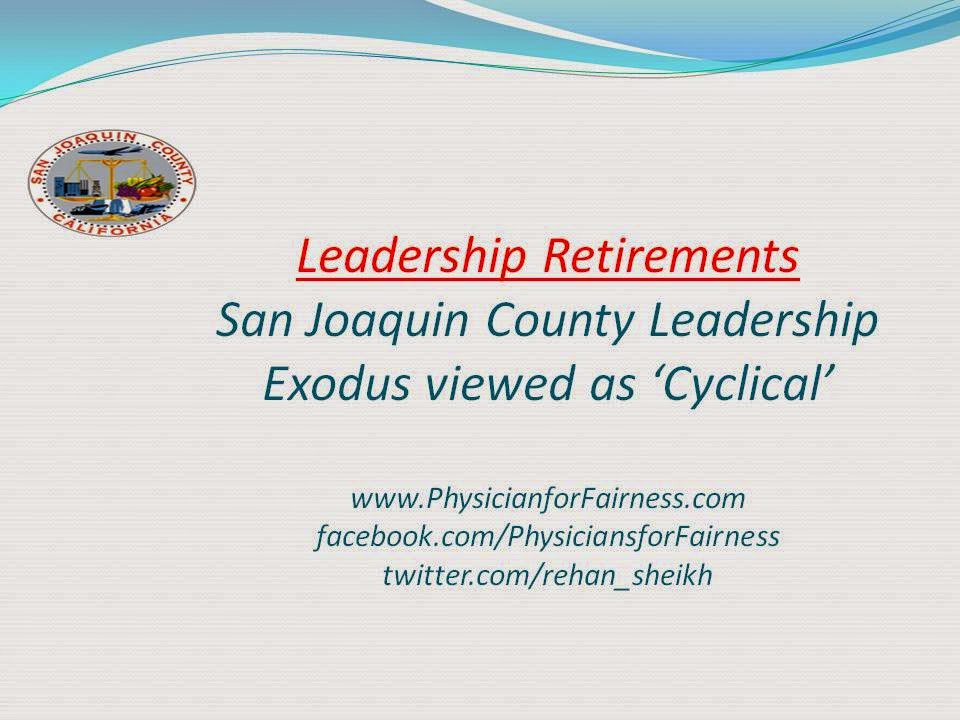 Changes at the top in the County

Many in top positions in San Joaquin County either have retired recently or plan to retire soon. Here's a list of some, including the year in which they were hired.


STOCKTON — By the end of the year, San Joaquin County government will see the departure of top managers leading the bulk of the county’s operations, including the directors of health, human services and public works. Added to other retirements from key positions over the past year, most county departments will see leadership changes, soon, if they haven’t already. Officials said it is a long-awaited shift that has been expected as county leadership reached retirement age.

“It’s been a bit of a rush, but I wouldn’t say it’s unexpected,” Human Resources Director Ted Cwiek said.

It is a trend that is playing out nationally, with the a crush of Baby Boomers reaching retirement age, though it has appeared it had been temporarily delayed as some people waited out the economic uncertainty of the last recession. And in San Joaquin County, some managers put off retirement plans to help their divisions of the government better handle cuts to services weathered to the recession’s impact on the county budget, he said.
But recruitment has drawn impressive pools of candidates to choose from to find strong replacements, County Administrator Monica Nino said. The county has recently hired a new agricultural commissioner and veterans services officer as well as directors of general services, purchasing, human resources and child support services.
The county is also shoring up its succession plans, and has added assistant director positions in two departments, so far, she said.
The departing managers will take with them much historical knowledge of their departments, she said. “I feel very fortunate to have been able to work with them, even though it’s been at the end of their careers.” But it’s also exciting to work with the Board of Supervisors to assemble a new team, she said. And it opens up options to make other changes, too.
Most of the people retiring came to work for the county in the 1980s. It was 1979 when soon-to-retire Environmental Health Director Donna Heran started working for the public agency that would later be absorbed by the county.
Manuel Lopez, who retired as county administrator last year, said this exodus of department heads reaching retirement age was expected. There was a similar demographic shift when he took the post about a decade ago, he said. “It is cyclical. People do leave when it makes economic sense for them.”
And it is not just hired staff members leaving. Some of the elected officials are changing, too. District Attorney Jim Willett didn’t run for another term and is retiring. And supervisors Larry Ruhstaller and Ken Vogel are terming out and won’t be back next year.


“It’s a changing of the guard,” Vogel said.

Other retirements expected this year are: County Counsel David Wooten, Environmental Health Director Donna Heran, Public Works Director Tom Gau and Human Services Director Joe Chelli.
So is Ken Cohen, director of Health Care Services, an agency that is seeing a lot of change. It includes Public Health Services, which earlier this year added Public Health Officer Alvaro Garza to replace the retiring Karen Furst.
And Public Health Services Director Bill Mitchell plans to retire after 40 years in government and 25 years with the county at the end of November.
Cohen describes Mitchell as somebody who brought passion and commitment along with his decades of experience in public health. He praised Mitchell’s management during recession cuts that saw public health staff cut by about 40 percent. And Cohen said Mitchell has been able to keep the county on the “cutting edge” of promoting community health, too.
When regional transportation officials adopted a long-term plan to spend billions of transportation dollars earlier this year, it reflected ideas that the health of a community besieged by chronic ailments like asthma, obesity and diabetes could improve if it grows in a way that promotes walking and biking and limits air pollution from cars. It was prompted by state law to reduce greenhouse gases, but the county’s version included the creation of a working group where public health would have a say in how the plan will be implemented.
Mitchell has seen other milestones in public health at the county, like an increased role for public health agencies in emergency preparedness and response that followed the Sept. 11 attacks and led to the opening last year of a new lab in Stockton meant to provide rapid testing of suspected virulent disease or bioterrorism for the eight-county region.
The 62-year-old said there were a number of factors in his deciding to retire, including economic. He said he plans to “drop out for a while” and was looking forward to do more cycling and watching more baseball.
He said he’ll be leaving behind a strong team at public health. “I really do have confidence that the department will do well and move forward.”
Link to the original article
Contact reporter Zachary K. Johnson at (209) 546-8258 or zjohnson@recordnet.com. Follow him at recordnet.com/johnsonblog and on Twitter @zacharykjohnson.